Several weeks ago I published an article called “Innovation Clique Analysis – An Irish Butterfly“. In that post I described how EMC’s Innovation Showcase idea repository was mathematically analyzed and visually displayed. I shared how five “clusters” caught my eye. These clusters are depicted below. 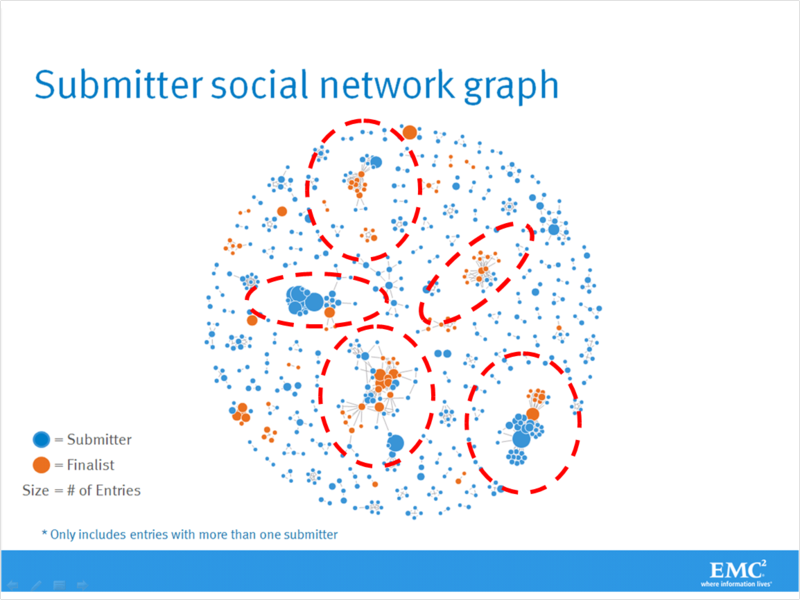 I described how a deeper mathematical analysis of one of these clusters yielded a butterfly-shaped graph of two Irish cliques united by an Irish hub. 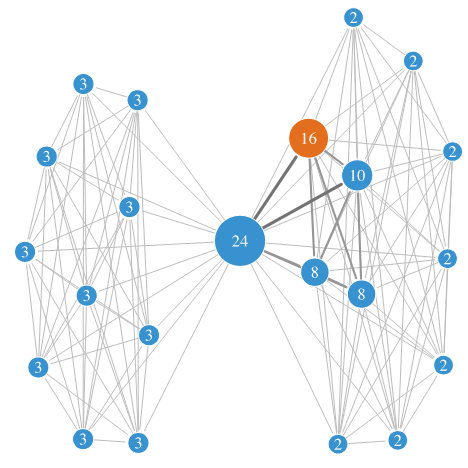 I retrieved the names of everybody on this graph, made a few phone calls, and sent a few emails. With each conversation I peeled back another layer of the onion and learned that the mathematical appearance of this cluster was no fluke. It was the result of an intentional effort to develop a highly scalable and repeatable innovation framework within the Ireland Center of Excellence (COE).

I had a phone conversation with Susan Pardoe, a member of Human Resources from the Ireland COE. Susan showed up as one of the nodes on the left-hand side of the graph. Susan mentioned that Ireland COE Vice President Bob Savage kicked off an Idea Generation Session with a statement that “things are moving so fast in our industry that we have to CONTINUALLY innovate to stay ahead of the game”. She described a process whereby trained facilitators guided a cross-functional team in the generation of ideas.

The next person I contacted was the hub in the graph, Sandra O’Connor. I discovered that Sandra was one of eight trained facilitators within the Ireland COE. She wrote:

“Our ideas stemmed from an innovation facilitation course that I attended in January which was organized by Brendan Butler here to get the skills for helping ideas to form. In addition to facilitating some cross functional innovation brainstorming, I used the skills within our own area to mine for ideas for the innovation competition.”

Her description answered all of my questions about the nature of the people on the graph. On the left-hand side is a set of cross-functional employees that participated in the original idea generation session. Sandra then facilitated the same process within her own team (the right hand side of the graph). As part of both facilitation efforts, Sandra entered the best ideas on behalf of the teams that generated them. The total idea count of these two cliques totaled 24.

The “hub” is a trained innovation facilitator. Fascinating!

My next interview was Brendan Butler (mentioned by Sandra as the organizer of the innovation initiative). Brendan serves a dual role as the Director of GPO Engineering as well as the Director of Ireland COE Innovation. Brendan was indeed asked by Bob Savage to form a scalable and repeatable innovation framework, and in January of this year he organized a two-day workshop to design the “funnel” process through which ideas would flow. One important result was the training of eight facilitators in the process of “Innovative Idea Generation”.

Several months later, four sessions were held that generated 150 ideas, which were eventually funneled down to eight ideas presented to senior management. Other ideas were passed to business units, some were catalogued, and the remainder was rejected.

The butterfly graph showed up as part of EMC’s global Innovation Showcase. How did Irish idea submitters fare overall in the contest?

First of all, idea submission from Ireland was up forty-six percent year-over-year. No other country submitted as many ideas.

Secondly, nine Irish ideas were selected for the final round. This means that out of sixty finalists (vying for 20 awards), 15% had Irish contributors.

And finally, 3 of the 20 awards were won by Irish idea submitters, again representing 15% of the total.

It Starts at the Top

In a recent post I highlighted how Executive Sponsorship is the critical ingredient for sustainable innovation initiatives:

“The average life expectancy of a New Ventures Group [ e.g. an Innovation Team] within an established, mature firm is approximately four years.  Senior leaders grow impatient with the seemingly low productivity in these groups and shut them down.” (RPI Professor Gina O’Connor)

In Ireland, their innovation framework starts at the top. The COE management team launched a targeted innovation initiative and their employees followed through. Many ideas were gathered and vetted within an Irish cocoon several months before the butterfly appeared.  I view it as my job to promote their framework as a best practice. Thanks to everyone who helped me to understand it.

And thank you to the Data Scientist (EMC Distinguished Engineer John Cardente) that generated the visualization that brought me down this path!

There is more work to do. What are the stories behind those other clusters?

Don’t miss an article (3,650+) – Subscribe to our RSS feed and join our Innovation Excellence group!