A machination is defined as a crafty scheme, a plot, or intrigue.

When I look at the wealth of information provided by the IDC in this year’s Digital Universe Study, I can’t help but think that machines are writing a pretty crafty plot in which we as humans are designing a fairly sophisticated communication network for them.

They were off by nearly thirty percent (the Digital Universe in 2010 was estimated by IDC to be 1277 exabytes).

Each year the IDC introduces more sophisticated insights, and this year is no exception. The intrigue surrounding the Internet of Things (IoT) and Machine To Machine (M2M) is a major subplot in the report.

Digital machines were estimated to produce 11% of the Digital Universe in 2005. These machines represent a “fourth wave” of digital producers. These waves are typically described as follows:

The IDC estimates that by 2020 machines will be generating 40% of the Digital Universe.

What technology shifts allowed machines to become protagonists in the drama of the digital universe?

I picked up additional insight on this question from a recent issue of The Economist. Three technology trends are enabling machines to become more prevalent:

While the IDC study does not specifically cover IPV6 and 4G networks, it does provide an interesting graphic on the plumetting cost of storage: 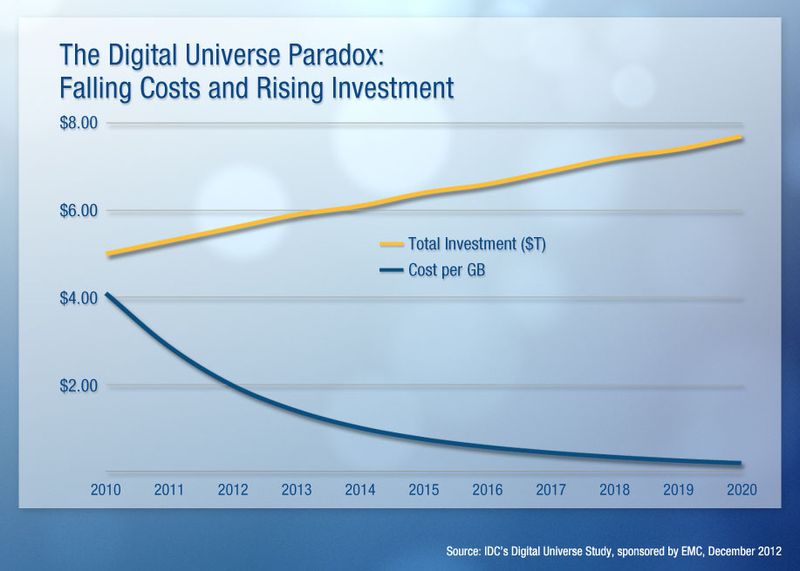 In 2020 the IDC also estimates that 200 billion “things” will be emitting digital bits, and much of this traffic will be broadcast in the hopes that other machines will return the favor via “sub-second” response times.

If billions of machines have any hope of responding to each other that quickly, we as humans are going to have to introduce new analytics paradigms in the cloud. In my next post I will highlight several technologies that can enable this emerging requirement.

Don’t miss an article (5,000+) – Subscribe to our RSS feed and join our Innovation Excellence group!