In a previous post I introduced an interesting new research project that my company (EMC) is working on with NUI Galway and Babson. During that post I quoted Professor Eoin Whelan‘s thoughts on Structural Holes:

Ron Burt’s theory of structural holes has proven to be influential in explaining how innovation transpires.  Burt proposes that gaps in a social network, structural holes, create brokerage opportunities.  A structural hole indicates that the people on either side of the hole circulate in different flows of information and advantages accrue to those individuals whose relationships span the structural hole.

In today’s digitally connected world, many social relationships are formed and maintained through social media.  The reason for the academic partnership is to examine if innovation theories such as Burt’s structural holes apply to networks formed through social media (and specifically Twitter).  The researchers are using social network analysis techniques to find correlations between thousands of employee ideas submitted into our Innovation Roadmap framework, and the structure of the submitter Twitter networks. The analysis of this data continues but initial findings suggest that the structural holes theory also applies to Twitter.  People with more disconnected twitter networks tend to submit better ideas, as determined by the average number of positive votes received by peers per idea.

I ask Eoin to provide some graphics that highlight their work so far, and he supplied two “sociograms”, which are described as follows:

The results can be better explained by examining the Twitter ‘sociograms’ of two EMC employees below.  Even though both employees roughly follow the same number of Twitter handles, employee A’s network is far more diverse.  In other words, the people employee A follows on Twitter are for the most part not following each other.  Mathematically, we can determine this level of diversity using the fragmentation ratio which for employee A is 87%.  The data is showing that highly fragmented Twitter networks, like employee A’s, are better for ideation.  In contrast, employee B’s Twitter network is quite compact.  Those
in employee B’s network are nearly all following each other, hence a low fragmentation rate of 12%.  Such cohesive networks provide more redundant information, which the data shows is negatively correlated with ideation. 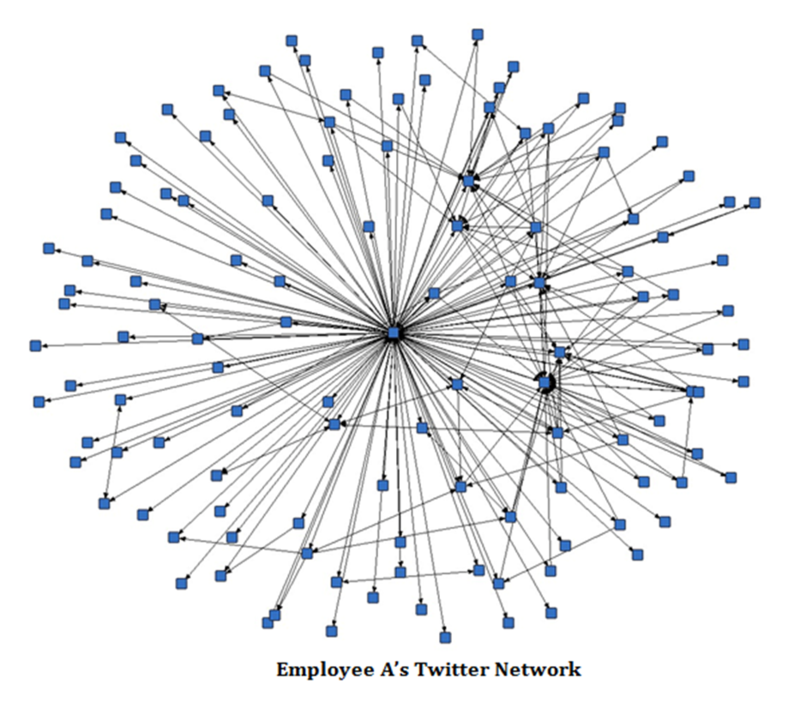 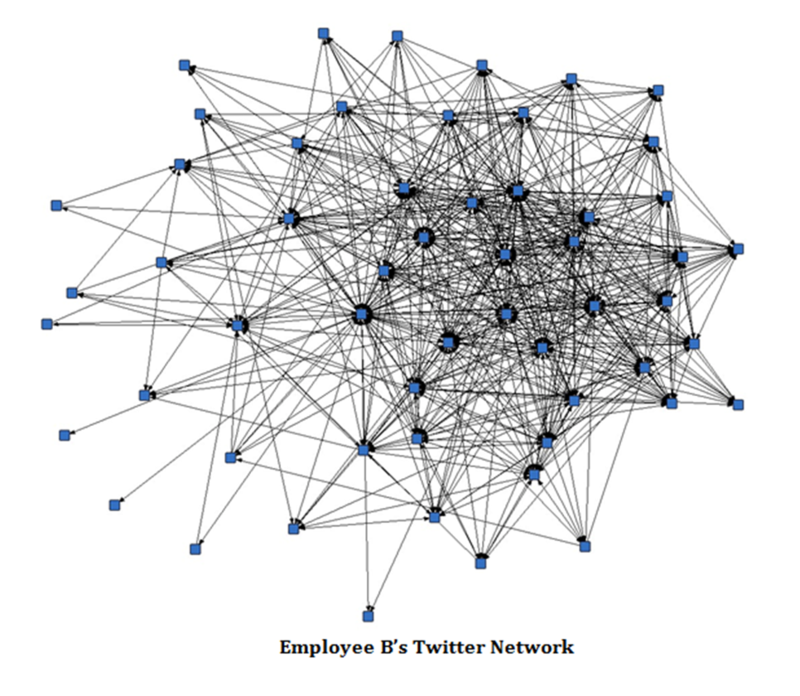 In reviewing these preliminary research results inside EMC, Distinguished Engineer John Cardente pointed out that the structural holes concept is closely related to the Betweenness network attribute that we have socialized previously. Specifically, network nodes that span structural holes tend to have high betweenness scores.

I’ll continue to publish more of these results as the research moves forward.