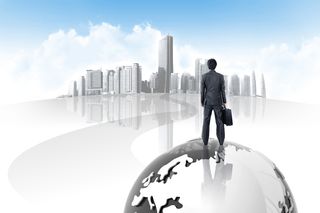 I’ve been writing a set of blog posts describing the role of an Invisible Executive, whose main task is to execute unapproved corporate strategy using someone else’s resources.

In my last post I described the technique of “Pitching the Prize” as a way to recruit other people’s resources. This approach, in my case, resulted in the successful recruitment of employees from six different countries who were ready to work on my unapproved corporate strategy. This strategy involved building a platform for analyzing corporate innovation activity (a Global Innovation Network Analytic platform).

In this post I take a look at persuading executives to fork over budget, people, and equipment. I like to call it Executive Bartering: getting executives to agree to give each other resources without knowing it.

Another name for it could be the Invisible Handshake. Agreements are made and deals are struck without one side knowing about the other.

The first step is to consider the most appropriate executive in your own management chain. In my case this particular individual owned dozens of researchers, ran a lab, sponsored a research relationship with MIT Media Lab, and was the main liaison to the EMC technical elite (the Fellow and Distinguished Engineer community). He was responsible for organizing the yearly Fellow and Distinguished Engineer Summit.

I told him that I planned on inviting some of the top technologists from the global technical community to the next Fellow and Distinguished Summit (which was six months away).

He said “who’s paying for their flights”.

And then he said “Sounds cool. Go ahead”.

I now had the leverage I needed to approach the executives on the other side of the handshake. I had secured open invitations for their technologists to attend (and present at) the top technical meeting of the year. I had reserved an auditorium at MIT (free as part of our yearly research sponsorship). I told everybody on my global team to line up a meeting with the executive in their own management chain.

I said “I’ve arranged for your employee to represent your geography’s technical accomplishments at the top technology summit of the year”.

I said “not us. But the rest of the geographies are invited, too”.

In the end, every executive agreed, and we had 100% attendance from the technologists that were helping me. As part of the brokering, permission was granted to the technologists to build the Global Innovation Network Analytic Platform. My own executive kicked in lab resources and people to be the “hands” that built the actual tool.

So six months after we formed, the team gathered in Cambridge, MA and spent an incredible day at MIT.

On the next day they spent an entire morning at the Fellow/DE Summit, with each of them discussing the technical accomplishments currently happening in their own regions.

We even ate for free several different times.

The entire experience built up a level of trust within the team, and they began to understand the value of working on new strategies that they believe in, often times at the expense of their own work (which they may or may not feel as strongly about).

Executive Bartering can be thought of as a multi-way brokering transaction. The brokering of specific team members is done directly, but negotiating the allocation of additional resources (e.g. equipment and money) is done indirectly. Both sides agree without necessarily talking to each other (the Invisible Handshake).

Up to this point the commitment of the team was secured using short-term goals and plans.

As I grew in my new role of Invisible Executive, I began to take a deeper look at longer-term techniques that would allow me to continually manage other people’s resources.  Daniel Pink refers to these areas as autonomy, purpose, and mastery.

In my next few posts I will describe specific approaches that increase employee allegiance to the strategy of an Invisible Executive. Each technique increases the pace of innovation for new and unapproved corporate strategies.