In a recent post I described the successful recruitment of a team of global employees to work on an unapproved corporate strategy: the building of a global innovation analytics platform. I was functioning in the role of an Invisible Executive, building on newly-acquired social media skills to influence the direction of the company.

My thinking on the Invisible Executive role was greatly influenced (as I’ve mentioned earlier) by a conversation I had with MIT Professor Peter Gloor. After asking him how to motivate teams to band together and work on an unapproved project, he gave me the following sage advice:

Actually, he gave me quite a bit more advice, but for the purposes of this post I’d like to dive a bit deeper and correlate his comment with Daniel Pink’s research regarding autonomy.

When Daniel Pink visited EMC’s Leadership meeting in early January of 2014, he focused quite heavily on employee autonomy. In the long term, he reasoned, granting autonomy will increase employee productivity.

I have found that ceding authority and encouraging employee autonomy go hand-in-hand. Invisible Executives don’t want power, people, or even recognition, for that matter. They want their corporate strategy accomplished.

Turning the execution of that corporate strategy over to my global team of volunteers was one of the best moves I could make.

I had already given them a purpose: build a platform for measuring innovation (which is the lifeblood of our company, EMC).

My next question to them was a direct ceding of authority:

“How will you build it”?

These global employees took the autonomy to step up and make it happen.

My Russian co-workers thought that an agile prototyping exercise would help the global team consider what to build and how. Their suggestions were as follows:

The Russia team created the spreadsheets, distributed them, collected them, and created, for example, the visualization below: 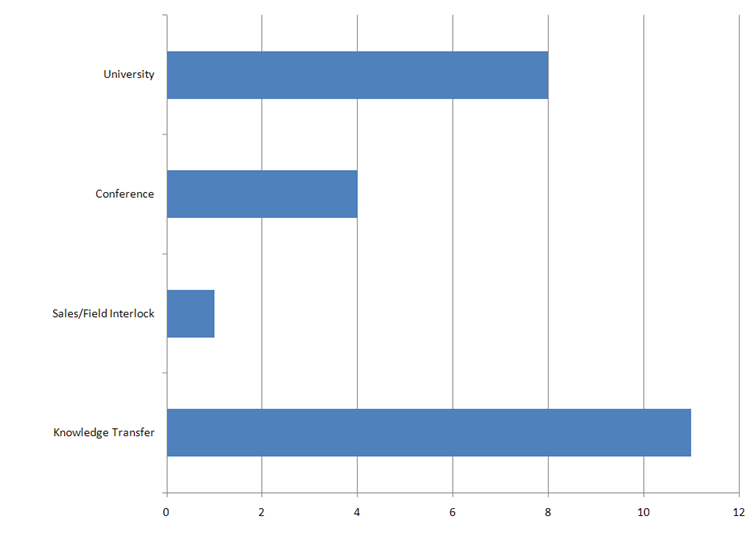 This chart essentially “counts” some of the innovation activities that happened across all geographies during a given time period.  As a team we reviewed this and came to some conclusions (e.g. let’s focus on improving innovation engagements with sales teams).

But the chart raised more questions than answers.  What conferences were they attending?  What universities were they visiting? What was the nature of the visit (e.g. what type of research)?  Who are the employees that typically visit these universities?

The team went back to the spreadsheets and began generating additional visuals: 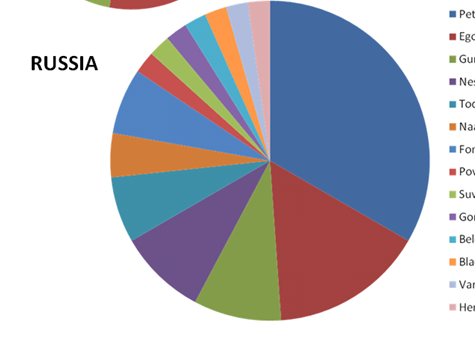 This chart (generated from the spreadsheet activity) shows the number of university visits made in several countries over many months, and presents the data in a form that highlights who made these visits and how many they made.

For me, this data was extremely valuable. I was beginning to see names that I didn’t know, and starting to understand the global innovation ecosystem in a way that I didn’t understand before.

We were at the beginning stages of measuring innovation. We created similar pie charts and bar graphs for other geographies. 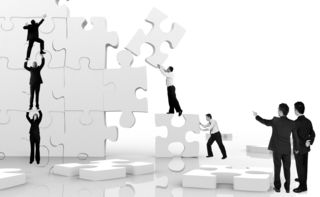 And then something unusual happened.

The conversations went beyond the creation of an innovation management platform and started to bleed over into a deeper understanding of the innovation activities themselves.

In order to stay focused, we kicked off a separate meeting known as a global “Virtual Brown Bag” session. Each geography, in turn, began presenting detailed information about their innovation and research activities.

Of course, we began keeping track of these conversations and posted them publicly for the entire company to see (transparency – another bit of advice from Peter Gloor).

The team was functioning in an autonomous fashion and powerful insights were being generated. There was a deeper resolve to create a process whereby we could build a formal innovation measurement platform.

I asked for additional ideas to continue driving the effort forward (once again ceding authority).

Other countries began to raise their hands. Over the next several months, they all contributed unique ideas that led to real deliverables.

The team had purpose and they were given freedom to be creative.

In an upcoming post I will describe how their contributions led them to the third key component of managing somebody else’s resources: mastery.