Innovation Is The Only True Way To Create Value In The Outsiders, William Thorndike argues that the most essential skill for a manager is capital allocation. To prove his point, he profiles CEOs such as Henry Singleton of Teledyne and John Malone of TCI who, while not household names, achieved outsized returns by wisely deploying their firm’s resources.

Thorndike also points out that most CEOs get their jobs not through exhibiting financial acumen, but for excellence in some other area, like production, marketing or sales. So capital allocation is a skill that many executives lack, having no opportunity to gain experience with it until they reach the top job.

It’s a interesting argument, but its fatal flaw is that he omits innovators like Steve Jobs and Mark Zuckerberg—and even Sam Walton and Herb Kelleher—because they represent “genius” that is too uncommon to replicate. That’s a startling omission. I would argue that while capital allocation is an important skill, innovation is the only true way to create value.

How A Business Makes Money

The goal of every business is to defy markets. Any firm at the mercy of supply and demand will find itself unable to make an economic profit—that is profit over and above its cost of capital. In other words, unless a firm can beat Adam’s Smith’s invisible hand, investors would be better off putting their money in the bank.

That leaves entrepreneurs and managers with two viable strategies: rent seeking and innovation. Rent seeking behavior, although often given purely negative connotations because it is associated with activities like regulatory capture, can have a useful function, such as building a trusted brand name to earn loyalty with customers.

Innovation is far more valuable because it raises the productivity of both capital and labor. Some innovators, like Kelleher and Walton, use existing technology to improve processes. Others, such as Jobs and Zuckerberg, develop entirely new product categories and reshape industries. Unlike rent seeking, innovation creates new value that didn’t exist before.

Yet unlike Thorndike’s concept of capital allocation which, although difficult to master is relatively easy to understand, innovation is so mindumbingly complex that it can’t be reduced to a single person or even a single organization. Still, like anything else, successful innovation starts at the top and leaders need to be held responsible for it.

Innovation is never one event, but a process of discovery, engineering and transformation. It’s also not something that can be hermetically sealed inside the C-suite, but requires an entire ecosystem. To understand how complex the process is, let’s look at lithium-ion batteries, the technology that powers everything from smartphones to electric cars.

As Steve Levine explains in The Powerhouse, when John Goodenough first discovered the principles of lithium-ion batteries in 1979, it was little more than an academic curiosity and hardly anyone took notice. By the early 1990’s though, improved microchips created demand for more powerful portable devices and Sony developed a commercial version.

Today, battery research is one of the hottest things going. Public sector research continues at places like Argonne National Laboratory. Private companies contribute through their participation in JCESR consortium and proprietary research. Elon Musk’s Tesla is also helping to scale up the technology in its Gigafactory.

Yet even these efforts are only a small slice of the innovation going on. Advances in wind and solar help drive demand for energy storage. Charging stations need to be deployed for electric cars. New products need to be devised and designed. At each stage, financing needs to be found, technical problems worked out and business models dreamed up.

Clearly, Thorndike’s dismissal of innovation as an activity only for rare geniuses like Steve Jobs and Mark Zuckerberg falls short. There is more than enough opportunity to go around. The real challenge is for managers to learn to manage innovation effectively.

As I explained in Harvard Business Review, there are four basic ways an organization can approach innovation: Basic research, breakthrough innovation, sustaining innovation and disruptive innovation. 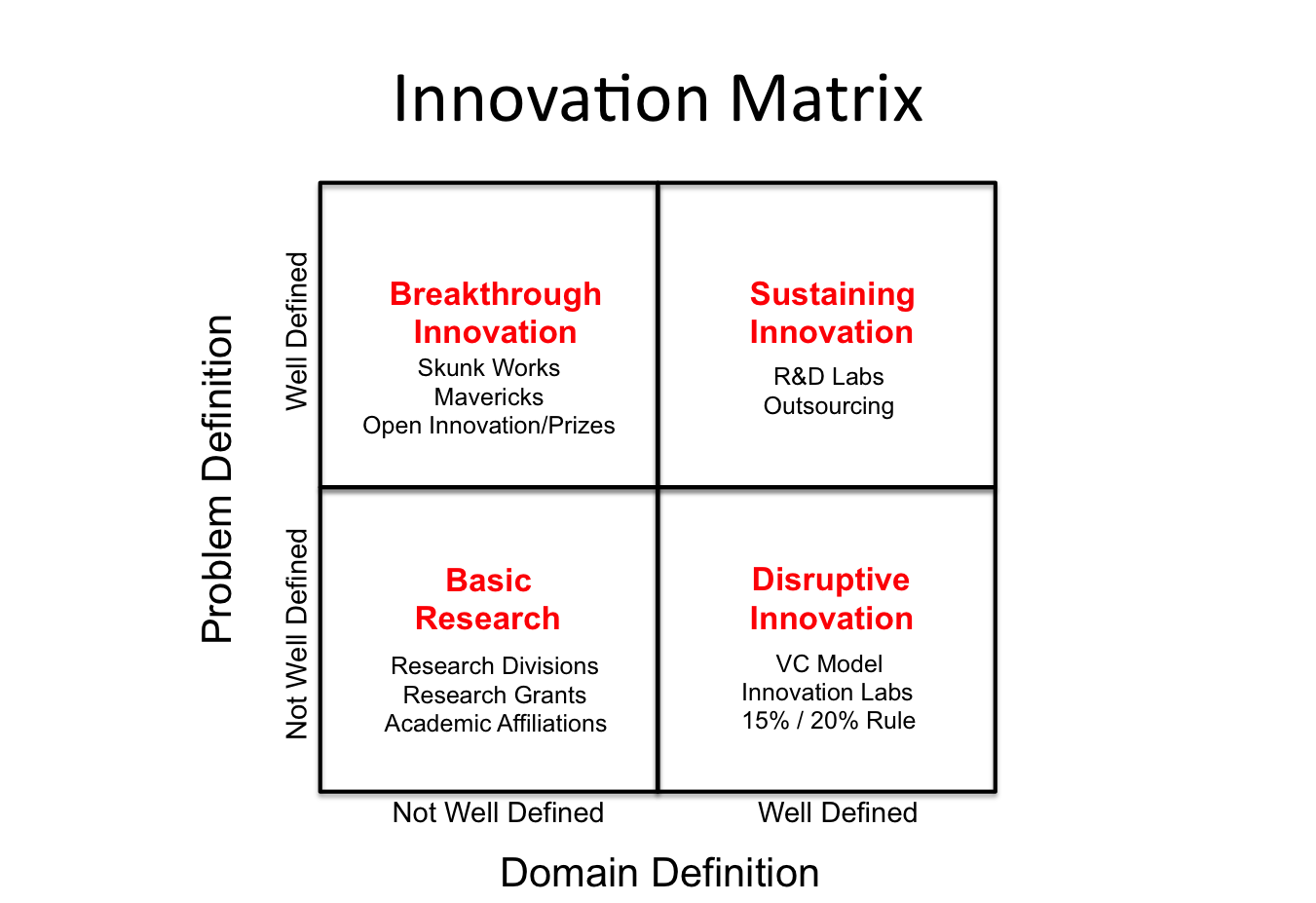 Basic research is generally done in the public or nonprofit sector. For example, Argonne national laboratory is where advanced research is done to produce the next generation of batteries. Those scientific breakthroughs are then used by sustaining innovators like Apple and Tesla to engineer new products, like thinner laptops and more powerful electric cars.

Sometimes, innovation is pursued to solve a well defined problem that needs a breakthrough. For example, P&G’s Connect and Develop program encourages outside researchers to help it find answers to thorny problems. Disruptive innovators, on the other hand, seek to find profitable uses for technologies that don’t seem to have a viable market.

What’s important is not so much what approach a firm takes, but that the direction is clear. Steve Jobs famously eschewed heavy R&D budgets and focused on engineering existing technologies into products people love. Microsoft, on the other hand, invests heavily in research, even basic research, and remains the world’s second most valuable firm.

Your approach to innovation will also define your limitations. Steve Jobs, for example, had the idea for a product that could “hold 1000 songs in your pocket” long before development on the iPod began, but had to wait for the right hard drive to become available. Nobody can do it all alone. Whatever your approach, you need to find the missing pieces elsewhere.

A great business model is one that creates, delivers and captures value effectively. The CEOs that Thorndike holds up as models provided great returns to their shareholders, but mostly through capturing value rather than creating it. They prospered by seeing value where others did not, which is an impressive skill, but does not increase the overall pie.

And despite their success, which was considerable, it pales in comparison to truly great entrepreneurs like Steve Jobs and Mark Zuckerberg, not to mention others who create innovative solutions to important problems, like more powerful technology, cures to disease and new sources of energy.

Yet you don’t need to be a technological whiz to be a great innovator. Sam Walton saw that existing technology could revolutionize how goods are distributed and sold. Herb Kelleher imagined a better way to transport people. Both men continued to pursue thousands of smaller improvements and honed their business models over the span of decades.

Despite what William Thorndike implies, we don’t all need to be geniuses to innovate. There are no shortages of problems—large and small—to solve. True success is about more than just capturing value. We should all strive to create some too.