Thinking Outside The Box with Crowdsourcing

Sihem Jouini is Associate Professor and Director of the Innovation & Entrepreneurship major at HEC ExMBA, and a researcher in organizational design for innovation and creativity.

She kindly took part to our Industry and Research conference about crowdinnovation in last February (see image below). Sharing views with her about innovation and idea generation crowdsourcing, she subtly directed me to define the unfair advantage of Imagine with Orange, a platform dedicated to crowdsource innovative ideas.

In a nutshell, Imagine’s unfair advantage is to fight the fixation effect that we face on our recurrent business, and let us think out of the box, thanks to a community of 25,000 internet users, coming from 86 countries, and leveraging digital capabilities to share +2,500 ideas,… and still counting.

Let’s go into more details about Imagine, where it comes from, how it fits within Orange open innovation ecosystem, and how it differentiates from other platforms on the necessary steps to build a crowdsourcing platforms:

The Origin of Imagine with Orange

Imagine is a corporate crowdsourcing platform launched in October 2014: it was presented by Orange’s CEO Stéphane Richard at the Orange Hello Show, an annual keynote which highlights the recent innovative products developed by Orange. Imagine with the Orange is an intrapreneurial initiative based on an idea from Nicolas Bry, and developed by a team working in the innovation division at Orange.

The idea behind Imagine is to capture ideas from elsewhere, that is to say beyond the prism of Silicon Valley, establishing direct connections with users in the field in every continent, getting close to their way of life and their digital uses, and especially in Africa and Europe, where Orange is operating.

Internet users present their ideas in a few words on the platform. Then, they comment, and vote on each other ideas. The ideas with the highest number of votes are invited by Orange to Paris to take part in an innovation coaching, with Orange experts, to dig in into the potential of their idea, and help them transform it into an innovation project. ‘Share your ideas, Orange is helping you to give them life’ is therefore the signature of Imagine with Orange.

Occasionally, a jury composed by Orange awards additional winners, and invites them to Paris as well. Quite often (50%), hackathons follow an Imagine with Orange contest, and are open beyond Imagines participants. It lets Imagine users mix, and confront fruitfully their ideas in real life.

Challenges are open to Orange partners: connected sport was a challenge set-up with Salomon, and data for water protection and biodiversity was a contest organized with the Ministry of environment.

The benefits for Orange and partners are multiple: Imagine is a tool to listen and dialogue with consumers and build a community of passionate users; it’s a way of collecting fresh ideas, trends & insights; it’s a channel to build brand awareness toward digital thematic, and a step toward cocreation with users and startups.

All in all, it’s a straightforward way to let the voice of the customers enter the innovation process very upstream, inspire the innovation teams, and guide them in the right direction, close to users’ expectations and pains. Let’s fall in love with the user’s problem, rather than with our solution!

Initially the Imagine team was proposing the topics for the monthly challenges. For the past 1,5 years, the innovation teams and the Orange countries have fully adopted the tool, and  initiated on their own the challenges’ topics.

Imagine has been recognized as well externally: Imagine was awarded by the ISPIM (International Society for Professional Innovation Management) as best innovation management tool of 2016, in competition with Huawei and SAP. 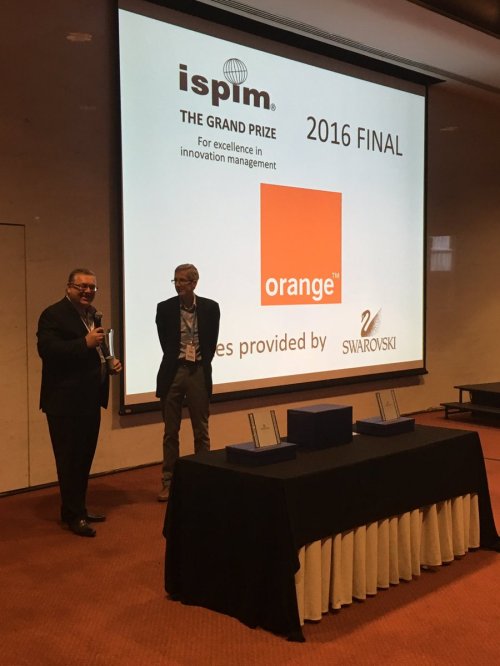 The specificity of Imagine’s community is to be very international and digital oriented. It is open to any user, from start-up to innovation fans, students, Orange employees, Orange customers and non-Orange customers. Imagine users focus on the ideation / creativity stage of innovation: the front-end of innovation. Imagine with Orange has now a community gathering over 22,000 Imaginers, coming from 84 countries, and having shared +2,500 ideas.

20 challenges have been completed on the platform. The growth of the community has been supported by Orange countries promoting the challenges at a national level through their web site, PR, social media accounts, master-classes and events.

Concurrently, leveraging Orange strong brand recognition internationally, the Imagine team has targeted digital influencers on social media: influencers help us spread the news about challenges’ openings on Imagine. Imagine with Orange has over 16,000 followers on Twitter, and its Facebook page was liked by +141,000 Internet users.

Orange has a long story of cocreation activities with its customers, Orange fixe and mobile subscribers.

In France it is established mainly through Lab Orange: this web platform focuses on developing and testing new concepts for Orange, and conducting experimentations with mass-market customers. Dream Orange is a complementary platform which handles online conversations on digital usages with Orange French customers. 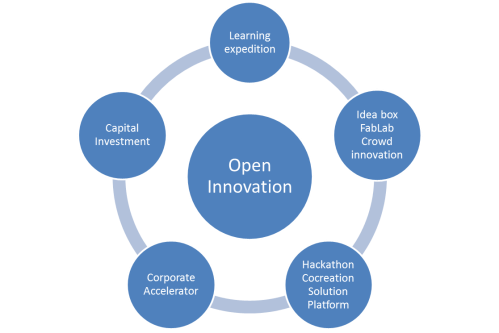 The case below shows how Imagine fits within this ecosystem and how the initiatives can be combined.

Hostabee is a startup which designs, and commercializes connected hive: connected hive improves significantly the job of the bee keeper by sharing with him accurate data on the way life is going on in the hive, and help him find the right position for the hive at the right time (hives have to be turned on a regular basis).

Hostabee was one of the winners at the Imagine with Orange contest related to IoT. They came to Paris, and participated to the Hackathon, which followed the online contest, attracting Imagine with Orange participants on their project, and enriched their offering and product during the Orange Hackathon. Though the startup did not win an award at the end of the hackathon , they were connected with the Orange Fab France accelerator. The acceleration led to establishing a business partnership with an Orange France business unit, including Hostabee offering in the Smart Agriculture portfolio of the firm.

Thinking Outside The Box

The analysis of Imagine compared to other crowdsourcing platforms reveals various characteristics that provide to Imagine its specific identity: a simple articulation of the challenge (“how digital could change…?”), an international footprint with strong presence in Europe, Africa, and India (see image below), an online community that regularly meet offline at hackathons, an exciting reward in the form of an innovation coaching in Paris by Orange experts, and an efficient transformation of the ideas into business projects.

But what clearly makes the magic is the outcome that provides each campaign: the defixation effect, or think-out-of-the-box trigger. For each campaign, we extract trends that are composed of:

Each time, some trends reassure the team that have initiated the campaign; but each time also, some trends open untackled opportunities for the innovation teams working on the topic:

After 20 campaigns completed and 2,500 ideas shared, Orange has built an innovation capital on extended aspects of the world we’re living in.

All in all, the Imagine’s trends coming out of each campaign are unrivaled because they clearly reflect the composition of the community: fans of innovation, digital oriented, and very international. This unique diverse community is what makes the defixation effect Imagine an unfair advantage: please come, try a challenge for your company, and meet with the Imagine’s community!