Apple’s new campus, Apple Park opened to both adulation and criticism. The Los Angeles Times’ architecture critic, upon seeing the original design, called it a “retrograde cocoon.” USA Today pointed out that opening up a glitzy new headquarters is often a signal of impending decline. Wired isn’t sure if it’s insanely great or just insane.

One thing that everyone can agree on is that the new campus is quintessentially Steve Jobs. Everything is designed — to excruciating detail — for not only aesthetic beauty, but for function and the end user. A new pizza box was even specifically designed so that the crust won’t get soggy as employees take a pie back to their office.

In a recent Harvard Business Review article, Jennifer Magnolfi, who researches hi-tech workspaces, explains how the new Apple headquarters acts as a functional workspace that supports the company’s style of innovation. This becomes even more clear when we compare the new campus to how other innovative organizations design their offices.

As I explain in my book, Mapping Innovation, innovation strategies, when properly conceived, are focused on the particular type of problem they are meant to solve. So it makes sense that different strategies, would require different workspace architectures.

To see what I mean, let’s overlay the matrix of four types of innovation featured in my book with companies that focus on different strategies: 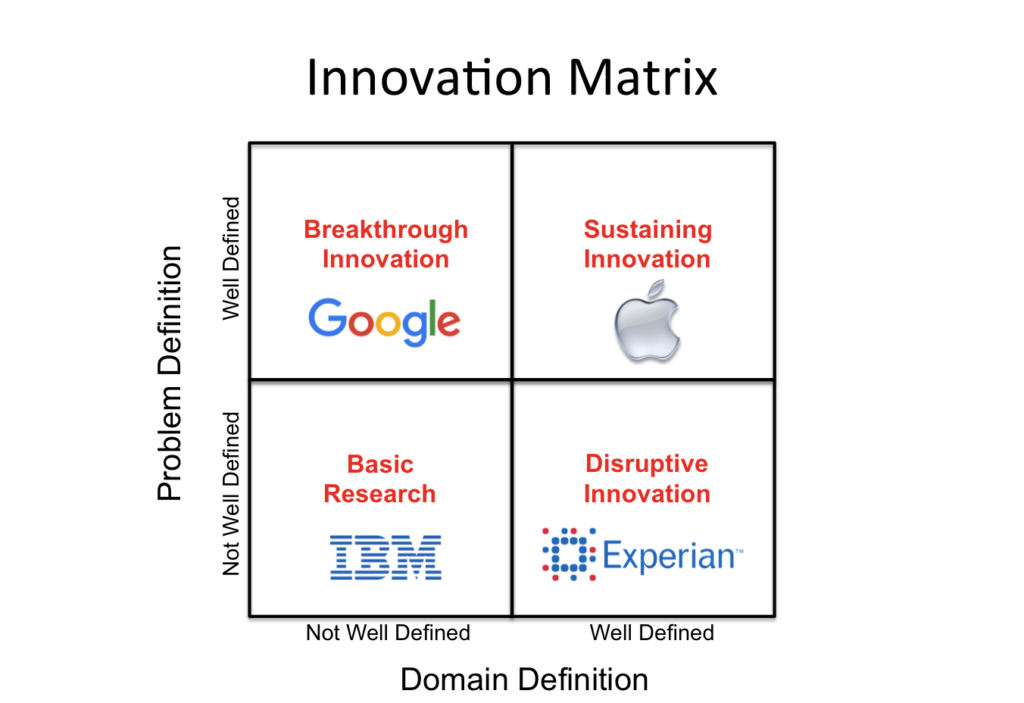 Apple, IBM, Google and Experian are very different companies which pursue very different types of problems. Apple, quite famously, uses existing technologies to design a very limited number of products that are “insanely great. On the other end of the spectrum, IBM relies on its research division to design fundamentally new technologies, like quantum computing and neuromorphic chips.

Google and Experian are both somewhere in the middle. Google focuses on well known problems that few organizations on earth can solve and throws enormous brain and computing power at them. Experian Datalabs, on the other hand, has assembled a crack team of data scientists to help identify — and then solve — problems in its customers’ businesses.

Each of these firms has designed workspaces with their innovation strategies — and the problems they seek to solve — in mind. 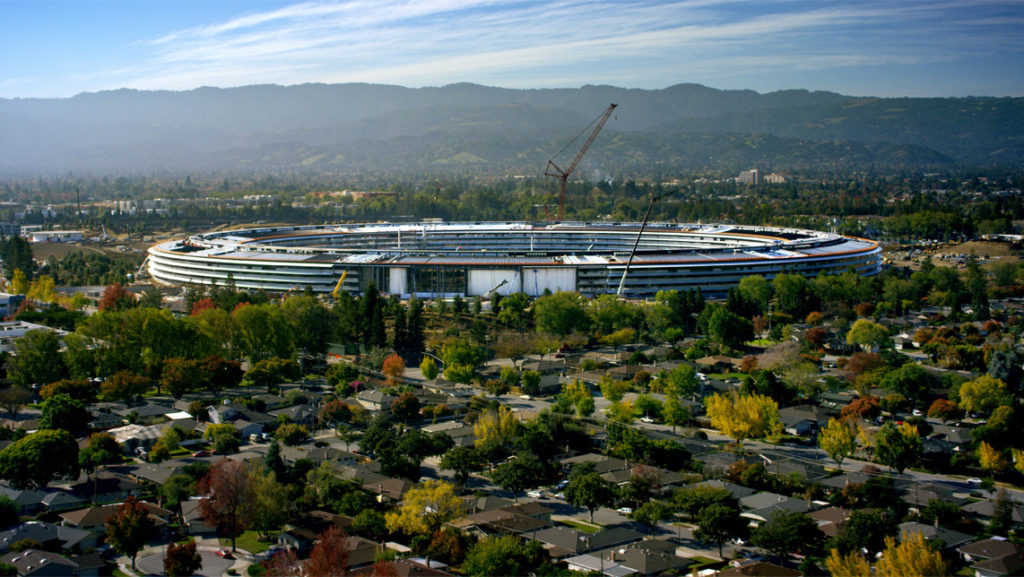 As Magnolfi notes in her article, Apple Park is a somewhat of a throwback. While many tech companies are blending their workspaces into neighborhood environments, Apple is setting their new headquarters apart. Instead of integrating with urban spaces, it has designed its new headquarters to blend in with the 9,000 trees it planted in the surrounding area.

Much like other Apple products, every facet of the campus was designed with obsessive detail. Jobs insisted that no seams or wires would show, so everything from the curved glass on the exterior to the office desks were designed to his exacting specifications. The most conspicuous feature is the 30 acre inner courtyard, complete with fruit trees and a pond.

In sum, Apple Park is exactly the type of place you would want to foster intense collaboration among 12,000 employees working on just a handful of products. Everything about it screams attention to detail and the spaces themselves are designed to facilitate random collisions between the people who work there. 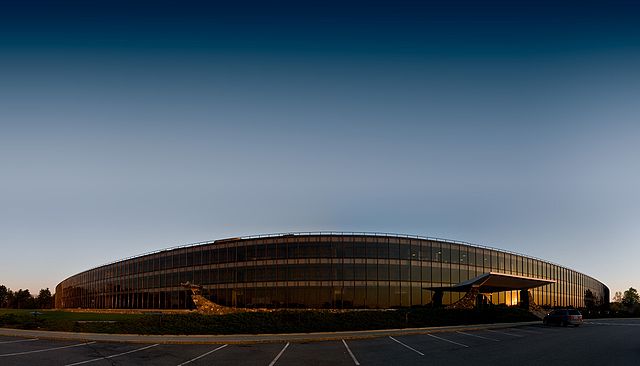 While Apple’s new campus is set up as a ring around an interior courtyard, IBM’s Thomas J. Watson Research Center in Yorktown Heights, NY is an almost impossibly long curve. Like Apple Park, it is set away from the surrounding area. There are dense forests and walking trails in every direction.

The first thing you see when you go through the main entrance is the word, “Think” in large silver letters. Upstairs there are rows of offices set in rows perpendicular to the large front windows. There is little natural light, but it is relatively easy for someone to drop by for a whiteboard session.

The most prominent feature of the interior is the long corridor that runs along the front of the building, which looks out onto the surrounding forests. It is perhaps the most significant common area and IBM scientists have been known to pace along it while they are working on a tough problem, running into a colleague and the collaborating in a nearby office.

Unlike most open plan offices today, there is very little hustle and bustle at IBM research. The place is almost serenely quiet. It is exactly the the type of environment where you would expect people to dream up technologies for a decade or two in the future.

Google competes with IBM in a surprising number of areas, like machine learning and quantum computing. The difference is that it begins working on these technologies when they are reasonably mature and potential applications are clear. So Google’s innovation focus is on problems that are well defined, but still devilishly hard to solve.

In order to do that, the company has created a well integrated ecosystem which utilizes a number of innovation strategies. For example, Google Brain started out as a 20% project. As it progressed, it was moved to Google’s “X” division where it incubated for more than a year. Now it is back at Google headquarters, where it works closely with engineers and project managers.

Google is now in the process of designing its new headquarters. Unlike the two examples above, the new campus will be well integrated with the local community. It will also be designed to reflect the agility that Google’s brand of innovation needs, with “lightweight block-like structures” that can be moved to accommodate changing team structures.

So while IBM Research is designed for top-notch researchers to pursue scientific inquiry with a small number of collaborators and Apple Park is focused on massive internal collaboration, Google is designing its workspace to be integrated both internally and externally. 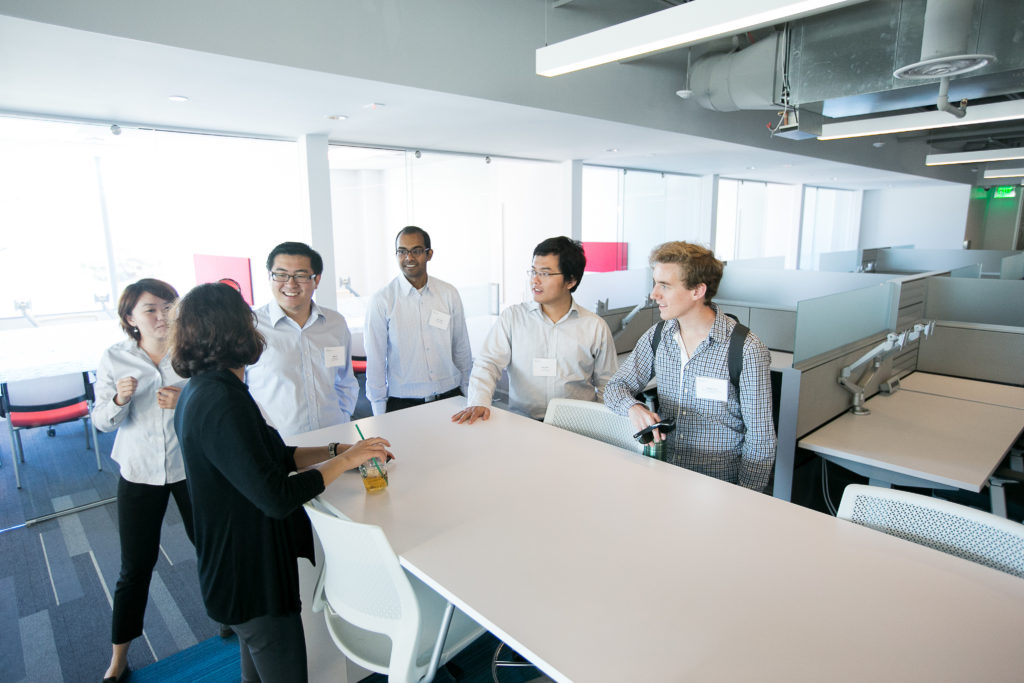 Experian Datalabs is a separate division within the data giant that is focused on a single mission: to identify opportunities in the marketplace and build solutions for them. It does this by working closely with Experian’s customers to identify problems, develop prototypes and then collaborate with operational units within the company to create a scales solution.

Essentially, Datalabs is a lean startup incubator within a multi-billion dollar company and its workspace needs to support two separate functions. First, it must provide a quiet work environment for its data scientists to develop the complex algorithms it needs to provide solutions. Second, it has to support active collaboration with Experian customers.

Its workspace was designed with all of this in mind. “What we did is essentially create an office with both a quiet and a noisy side,” Eric Haller, who leads Datalabs, told me. “On the noisy side, we have a conference area and a large space for people to kick around in. The quiet side has small, carpeted offices to quell ambient noise. We also made it so about 50% of the surfaces can be written on, so our scientists can start jotting down ideas wherever they have them.”

Haller also believes that a well rounded life leads to happier, more productive employees. So he made sure the office was convenient to restaurants, a gym and other amenities. Located in San Diego, he also made sure it was close to the beach.