If You Want to Change the World, You Need to Start With a Keystone Change On December 31st, 1929, the Indian National Congress, the foremost nationalist group on the subcontinent, issued a Declaration of Purna Swaraj, or complete independence from British rule. It also announced a campaign of civil disobedience, but no one had any idea what form it should take. That task fell to Mohandas Gandhi.

The Mahatma returned to his ashram to contemplate next steps. After his efforts to organize against the Rowlatt Act a decade earlier ended in disaster, he struggled to find a way forward. As he told a friend at the time, “I am furiously thinking day and night and I do not see a way out of the darkness.”

Finally, he decided he would march for salt, which impressed almost no one. It seemed to be an incredibly inconsequential issue, especially considering what was at stake. Yet what few realized at the time was that he had identified a keystone change that would break the logjam and the British hold on power. Today the Salt March is known as Gandhi’s greatest triumph.

A Tangible And Achievable Goal

One of Gandhi’s biggest challenges was to connect the lofty goals and high-minded rhetoric of the elites who led the Indian National Congress with the concerns of everyday Indians. These destitute masses didn’t much care whether they were ruled by British elites or Indian elites and, to them, abstract concepts like “freedom” and “independence” meant little.

Salt, on the other hand, was something that was tangible for everyone, but especially for the poorest Indians and the British salt laws provided a clear and actionable target. All you had to do to defy them was to boil seawater to produce salt. What at first seemed trivial became a powerful call for mass action.

In researching my book, Cascades, I found that every successful movement for change, whether it was a corporate turnaround, a social initiative or a political uprising, began with a keystone change like Gandhi’s salt protests. To achieve a grand vision, you always have to start somewhere and the best place to begin is with a clear and achievable goal.

In some cases, as with voting rights in the women’s movement in the 19th century and, more recently, marriage equality for the LGBT movement, identifying a keystone change took decades. In other cases, such as improving worker safety in Paul O’Neil’s turnaround of Alcoa or a campaign to save 100,000 lives in Don Berwick’s quest to improve quality in medical care, the keystone change was part of the initial plan.

The concept of Indian independence raised a number of thorny issues, many of which have not been resolved to this day. Tensions between majority Hindus and minority Muslims created suspicions about how power would be structured after British rule. Similarly, coordinating action between caste Hindus and “untouchables” was riddled with difficulty. Christians and Sikhs had their own concerns.

Yet anger about the Salt Laws helped bring all of these disparate groups together. It was clear from the outset that everyone would benefit from a repeal. Also, because participating was easy—again, it was as simple as boiling sea water—little coordination was needed. Most of all, being involved in a collective effort helped to ease tensions somewhat.

Wyeth Pharmaceuticals took a similar approach to its quest to reduce costs by 25% through implementing lean manufacturing methods at its factories. Much like Gandhi, the executives understood that transforming the behaviors of 20,000 employees across 16 large facilities, most of whom were skeptical of the change, was no simple task.

So they started with one process — factory changeovers — and reduced the time it took to switch from producing one product to another in half. “That changed assumptions of what was possible,” an advisor that worked on the project told me. “It allowed us to implement metrics, improve collaboration and trained the supervisor to reimagine her perceived role from being a taskmaster that pushed people to work harder to a coach that enables improved performance.”

Breaking Through Higher Thresholds Of Resistance

By now most people are familiar with the diffusion of innovations theory developed by Everett Rogers. A new idea first gains traction among a small group of innovators and early adopters, then later spreads to the mainstream. Some have suggested that early adopters act as “influentials” or “opinion leaders” that spur an idea forward, but that is largely a myth. 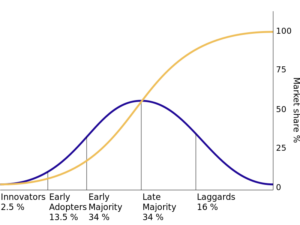 What is much closer to the truth is that we all have different thresholds of resistance to a new idea and these thresholds are highly contextual. For example, as a Philadelphia native, I will enthusiastically try out a new cheesesteak place, but have kept the same hairstyle for 30 years. My wife, on the other hand, is much more adventurous with hairstyles than she is with cheesesteaks.

That’s how transformative ideas gain momentum and it’s easy to see how a keystone change can help move the process along. By starting out with a tangible goal, such as protesting the salt tax or reducing changeover time at a single factory, you can focus your efforts on people who have lower thresholds of resistance and they, in turn, can help the idea spread to others who are more reticent.

Paving The Way For Future Change

Perhaps most importantly, a keystone change paves the way for larger changes later on. Gandhi’s Salt March showed that the British Raj could be defied. Voting rights for women and, later, blacks, allowed them to leverage their newfound power at the polls. Reducing changeover time showed how similar results could be achieved in other facets of manufacturing. The 100,000 lives campaign helped spur a a quality movement in healthcare.

None of these things happened all at once, but achieving a keystone change showed what was possible, attracted early adopters to the cause and helped give them a basis for convincing others that even more could be achieved. As one of Gandhi’s followers remarked, before the Salt March, the British “were all sahibs and we were obeying. No more after that.”

Another benefit of a keystone change is that it is much less likely to provoke a backlash than a wider, sweeping vision. One of the reasons that the Salt March was successful is that the British didn’t actually gain that much revenue from the tax on salt, so were slow to react to it. The 100,000 lives campaign involved only six relatively easy to implement procedures, rather than pushing hospitals to pursue wholesale change all at once.

So while it’s important to dream big and have lofty goals, the first step is always a keystone change. That’s how you first build a sense of shared purpose and provide a platform from which a movement for change can spread. Before the Salt March, Gandhi was considered by many to be a Hindu nationalist. It was only after that he truly became an inspiration to all Indian people and many others around the world.

Posted in Change, Feature Of The Week